Here are six take-away insights from Hovnanian execs wrap-up of fiscal year 2022 and Q1 guidance on 2023.

Here are six take-away insights from Hovnanian execs wrap-up of fiscal year 2022 and Q1 guidance on 2023. 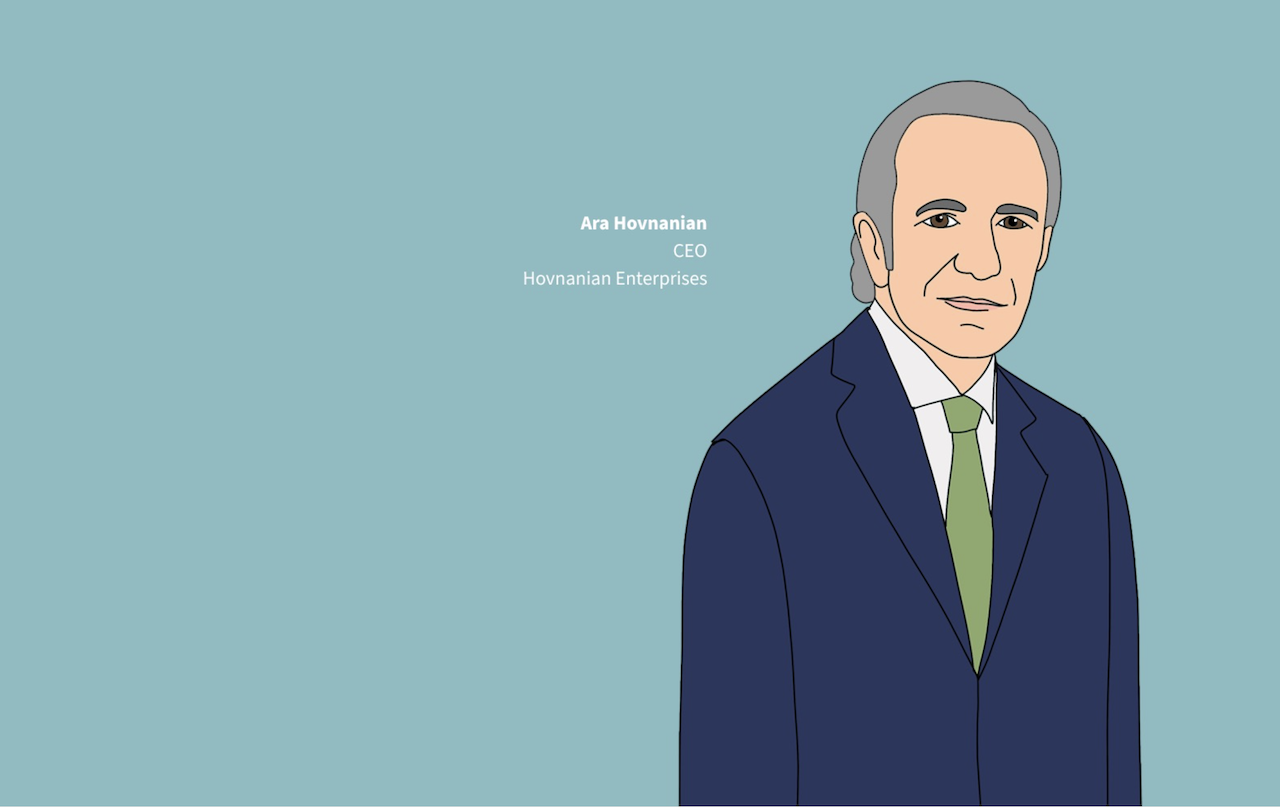 Candor – the likes of which few other public homebuilding enterprise chief executives have the double-digit ownership, insider share leverage, and overall free-rein to express publicly – has become Ara Hovnanian's signature.

Ara K. Hovnanian, chairman, president and ceo of Hovnanian Enterprises, Inc., accounts to institutional and individual shareholders in a way that stands apart from peers. That's because his financial stake in the company runs deeper and higher than many of those peers. His exposure to both risks and rewards – skin in the game – gives him that free-rein to be straight with other investors and stakeholders.

Immersed as the nation's economy is in what's fittingly described as a cost-of-living crisis whose ultimate severity and duration remain locked in a Rosetta Stone of clues, constructs, and wildly speculative conjecture, plain speaking is hard to come by these days. Narratives and storytelling – as crucial as they are to deepening understanding and engagement with initiatives and efforts that matter – sometimes merely serve to eclipse the rub of reality rather than to reveal it.

Consumer households, their confidence levels, their income and expense levels, their family formations, and their lifestage change behaviors – as always -- hold the keys to modeling any housing year ahead. Those keys are anybody's guess right now.

Here's a high-level on the latest from the University of Michigan Survey Of Consumers preliminary Consumer Sentiment Index:

Consumer sentiment rose 4% above November, recovering most of the losses from November but remaining low from a historical perspective. All components of the index lifted, with one-year business conditions surging 14% and long-term business conditions increasing a more modest 6%. Gains in the sentiment index were seen across multiple demographic groups, with particularly large increases for higher-income families and those with larger stock holdings, supported by recent rises in financial markets."

In that context, Hovnanian Enterprises announced a wrap to its fiscal 2022 financial and operational performance, as well as its fourth quarter results, which you can find here.

Crediting the Hovnanian team for a strong financial and operational performance, the ceo summed it up this way:

We are pleased with the strong performance for our fourth quarter and fiscal year. We exceeded our full year guidance for adjusted pretax income and adjusted EBITDA. Our strong performance in fiscal 2022 was partially the result of deliveries which were contracted during a time when demand for new homes was much stronger than it is today.

What comes through loud and clear in both Hovnanian's prepared remarks and Q&A responses to analysts in an earnings call yesterday are two level-setting macro views, one that reality checks what exactly has been going on, and one that gives evidence for constructive improvement in the coming year.

Here, verbatim from transcripts of the yesterday's call, are highlights of Ara Hovnanian and Larry Sorsby's remarks, the first of which breaks ranks with the widely held narrative that the market is "normalizing" to more sustainable 2019, pre-Covid levels of activity, pricing, etc. based on a comparison of new order activity in Hovnanian communities from 2019 and 2022.

The second view – evidenced by the still-underbuilt market, a strong demographic demand stream, and strong interest levels captured among Hovnanian's web traffic and digital platforms – is for a short, hard fall followed by a rebound in the Spring or Summer of next year.

We have no illusion that the current state of new home sales or the housing market overall is not good. It is indeed bad. However, for the reasons that we've just cited, we think that pain might be deep but will last a relatively short period of time."

Here are some of the other highlights of the earnings call:

On 'Normalization' in new-home activity

We compare only fiscal '22 and the pre-COVID year of 2019 by month. You can see that we were tracking ahead of 2019 until the month of May. That was definitely the pivot point as the cumulative effect of rising mortgage rates became clear. From that point on, we've been selling fewer homes per month than the pre-COVID sales pace....

... If you annualize and seasonally adjust our fourth quarter sales pace, you get to 21 sales per community, a slow sales pace and one that we haven't seen since the great financial crisis of '08."

On Cancellations – Backlog and new orders

... [Order deposits vary] quite a bit by geographic region. The East Coast tends to be higher I think on base price. The higher divisions have about a 10% purchase price deposit. On top of that if they're doing a lot of options and upgrades, we take a higher deposit on those options and upgrades. On the West Coast, we tend to have lower deposits. I think somewhere close to 3% is very typical on the West Coast. Sometimes when it's higher than 3%, there's a negotiation around 3%.

On Incentives and Concessions

By November, incentives in our new contracts had increased from the 3% level that we averaged in the first half of fiscal '22 to roughly 9.5%, which is higher than our historical average incentive rate. Even after increasing our use of incentives, the margin on most of the new homes that we're selling today remain in the low 20% range, slightly above our historical average gross margin of 20%. Let me repeat that. Even after increasing our use of incentive, our average margin on new homes that we're selling today remains in the low 20% range.

Our QMIs per community are consciously on the rise. We have gone from 3.2 QMIs per community in the third quarter to 5.6 at the end of the fourth quarter. This level of QMIs is higher than our historical average, but similar to levels we had right before the COVID surge in demand. As a result, in the recent weeks, QMI sales account for 60% of our weekly sales versus about 40% historically.

In this rising rate environment, we are temporarily targeting approximately seven QMIs per community, with a few just beginning construction and a few midway through construction, and we're certainly focused on selling those that are near the end of construction...

On trades and supplier cost concessions

We, like other builders, have been receiving inbound calls. And you're also correct. They're typically on the frontend trades. Most of our trades are not new to this rodeo and have been through housing downturns before. They know they enjoyed the price appreciation and their price appreciation during the upturn. And I believe most are fully expecting to have lower pricing on new communities going forward. Regardless of whether they're inbound or not, we are definitely working on a national effort to re-discuss pricing in light of the environment with all of our subcontractors and suppliers to reduce our pricing.

[For 28% of controlled lots optioned in 2022] some of those lots obviously were in the early stages just during due diligence so that we can actually walk away without even losing our deposit. So not all of those '22 are even that amount at risk. But clearly, the lots that we controlled in '22 are the riskiest land deals that we have. We're not going to move forward and buy that. Even if we do have to risk the entire deposit to walk away, I'd rather do that than continue to invest money in it, to develop it and bring it to market if it doesn't pencil what today's home prices, construction costs, and sales pace. But if it doesn't, as you mentioned, we'll try to renegotiate and most sellers understand that the market really changed. Some are willing to alter term, some aren’t. So we don't know how many of those '22 will ultimately make it to the finish line or not.

And the signature Ara Hovnanian candor comes in his final wrap up on the call.

There are great things about our quarter and things we're not so happy about, particularly regarding new contracts. But we've been down this road before.