A candid TBD one-on-one conversation with the top-20 ranked homebuilder's chief strategist, who believes 'politicized economics led to a bad recipe to stimulate the economy when they did.'

A candid TBD one-on-one conversation with the top-20 ranked homebuilder's chief strategist, who believes 'politicized economics led to a bad recipe to stimulate the economy when they did.' 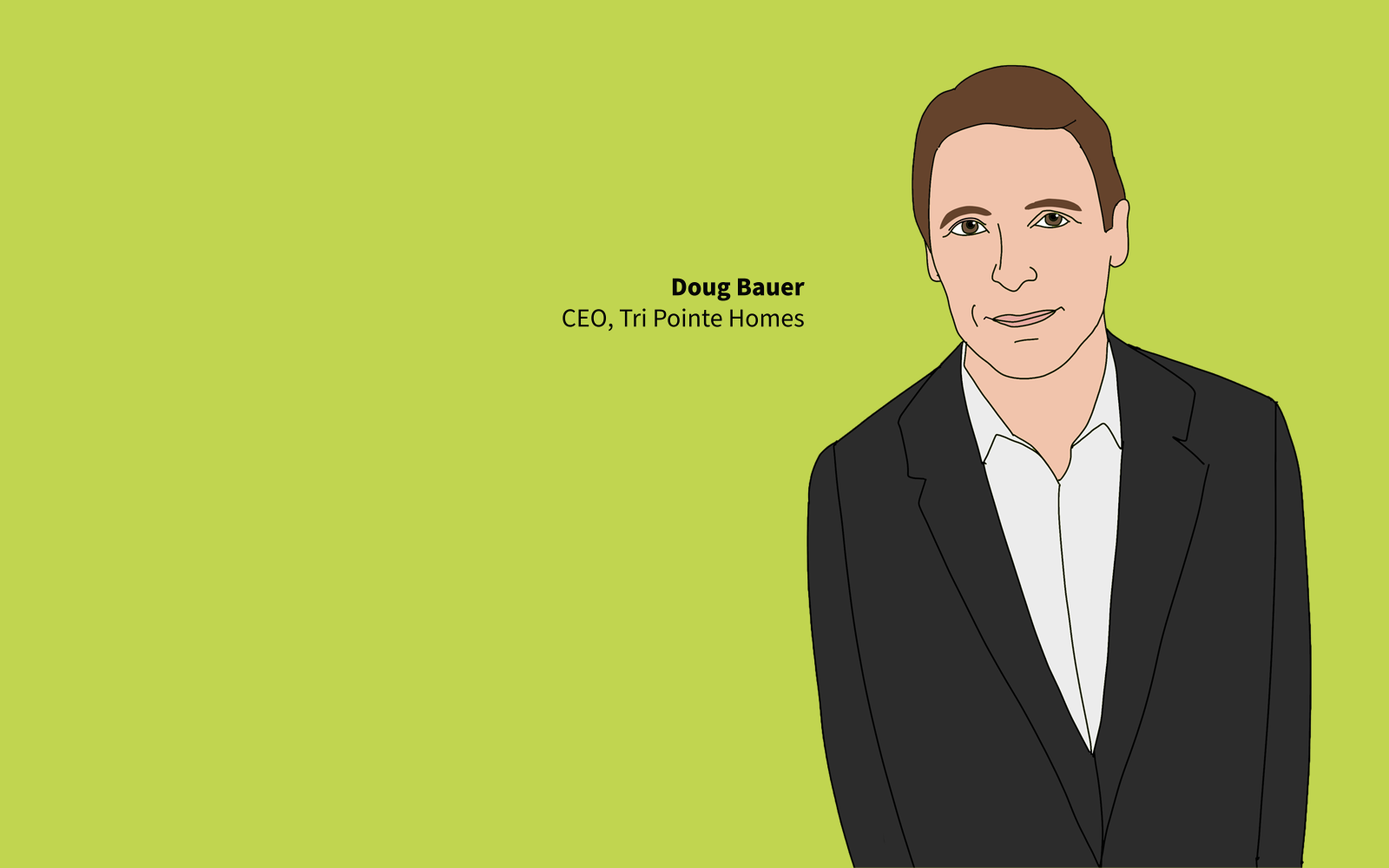 Some people tap a superpower, awakening with the lark each day without benefit of an alarm clock.

Each setting plays a role in the way Bauer does what today's homebuilding thought- and practice leaders do – problem-solve and, simultaneously, seek solutions for challenges that have not yet arisen.

"I have my antenna up on the present- and short-term, which we'll call 2021, and the medium-to-long term, which we'll say is 2022 and beyond," says Bauer, in a frank, expansive conversation that covers his corporate strategist's concerns with Federal government monetary and fiscal policy, his belief that the Fall may kickstart job growth, and his sweeping sense of opportunity in the long – albeit turbulent -- wake of the Covid-19 pandemic.

If the near-term and the long-haul represent two of Doug Bauer's internal clock settings, the third zone of instinctive reference is Bauer's three-plus decades of time-testing and wisdom, gained in many years as a top executive at William Lyon Homes, and then as an entrepreneurial co-founder of Tri Pointe in the early aftermath of the Great Recession in 2012.

It's that frame of mind that comes of having experienced housing's ups and downs through multiple cycles that informs Bauer's take on the spasms of price surge and materials bottlenecks that define builders' big challenge of the near-term. That is, says Bauer:

"The biggest hurdle is the supply chain. What our sales associates are really doing mostly right now is monitoring and managing priority lists, and that’s a Class A problem to have. The challenge now is you can get [new homes] sold, but you’ve got get them started and built. I feel like we’re at a carnival, playing the game whack-a-mole. Every day, every week, every month a new supply chain challenge comes up. Luckily, we have great purchasing and operating teams, and they continue to be on the phone working the sources, working flexibility, and materials substitution, and everything else to keep managing customers' expectations."

That's the short-term time zone, and it's Bauer's canny instinct to recognize that these video-game arcade-like "hurdles" are ones the pros in the Tri Pointe house are fit to handle as well as can be done, while focus needs to concentrate on the the bigger prize – the mid-to-longer haul future.

This is where Bauer's playbook shifts from problem-solving to solutions-seeking, for too many questions cloud the horizon for any certain path to come clear. One thing Doug Bauer knows, is that he's not happy – as the Federal Reserve and its commissioners try to fathom the nature of inflationary forces that have set themselves in motion – with the politicization of government economic policy in the time of the pandemic and its impact.

As New York Times economics columnist Neil Irwin writes, most times the cure for high prices is high prices, but sometimes it takes a while.

Just because markets work doesn’t mean they will work instantly. The complexity of the way many of the goods still in short supply are produced, transported and sold means that people in those markets are reluctant to predict the kind of snapback evident in lumber prices.

For them, a number of different problems — many but not all caused by the pandemic — are colliding at once, creating supply tangles that are taking time to unravel. In some cases, inflationary forces already set in motion have not yet made their way through to consumers.

What galls Doug Bauer  – and many of the business leaders in homebuilding and related industries – is what he sees is a self-inflicted malaise, paralysis, and inertia that government stimulus has cast, at least for the time-being, across one of the engines of American dynamism, the need to work, to earn wages, to make a living. This stagnancy – pervasive right now – is where Bauer's antenna on the mid-to-long-term future encounters its greatest amount of static and noise.

The Federal government has done nothing to help the employment situation. It actually discouraged employment. That actually is very discouraging for all of us in business, whether you’re a homebuilder, a hospital, a hotel company, you name it. It’s everywhere. I don’t mean to go down a political diatribe but it was a bad recipe to stimulate the economy when they did. They thought that that was going to get them a lot of political votes. I guess it does from people who like to sit at home and not work.

By Fall, when schools start back and when stimulus and rescue programs begin to expire, releasing their hold on workers that have thought it best to wait out a return to workplaces given their extended and expanded unemployment benefits, Bauer foresees a real beginning of an economic reversion to norm. Still, he believes, the question then is how big the impact of structural inflation will be.

For now, Bauer acknowledges, the question may not be answerable.

The big thing that has my antennas up is inflation, and I’m still trying to figure out the impacts, coming out of the pandemic, of what I call self-induced coma. None of us have come out of it, and [Fed Chair] Jay Powell is amazing but, I’m trying to figure out this transitory nature of [inflation and how it settles out]. For instance, if you go to a restaurant and your check now is $100 and it used to be $80; so six months from now is it going to be $80? Or 9 months? Or in another example, how does the transitory nature of inflation impact used cars? Say a used car was $8,000 and now it’s $10,000. Is that going to go back to $8,000? Now, yeah, if demand softens and people pull back costs should reel-in, so maybe it is transitory. But none of us really know. Jay Powell’s way smarter than you and I, I think, and he’s a brilliant guy. But a lot of the business people are starting to wonder and get concerned, and I’m concerned about what lasting impacts inflation can have on our economy. And what does that do to interest rates and the overall economy going forward.

Interest rates, and their connection to home prices and households' buying power lie at the crux of how Tri Pointe's lot and land pipeline pencils and how its home product and community mix need to work over the next several years. So, this is where Bauer's spidey sense of the long-haul kicks-in. He wonders aloud, that although home prices in the past 12 months have reached jaw-dropping heights in a staggering spike, perhaps reframing them might alter the perspective.

That decade-long price appreciation curve may look more normal – even including 2021's anomalous surge – than the shorter-term framing of the hikes.

In any case, come what may in terms of the far horizons – Bauer's internal clock mechanisms have a plan in place, even if interest rates go up and start to weigh on both average selling prices and consumer households payment power in the future.

Since 2018, we’ve been shifting our mix, taking our entry-level premium business from 30%, and growing that up to 40% by 2023. At the same time we're taking our higher-end luxury from where it has been at about 12% of  our mix and bringing it to almost next to zero by 2023. That way, we're primarily an entry-level, first- and second-move up buyer.

I like that strategic position, because if there’s higher interest rates in the future, and house pricing gets affected, I’d rather be on more affordable pricing. Because one of the things I believe – apropos of demographics -- is that we’re just touching surface of millennials, and right behind that is GenZ.

If you talk to millennials – and I've got three of them, they're of a mind that there could be another pandemic in a couple of years. They're saying 'I’d like to get a house and a yard, and a dog, and someplace to work from.' I can hear this from a 28-year old.

The pandemic has had a real mental influence on the consumers mind, especially for those millennials who thought they were going to hang out in Airbnbs and apartments in the city all the time. They’re now worried about the next pandemic. There's kind of a positive there for us homebuilders.