In His Own Words: Larry Webb's 5 Teachable Moments As Leader

As one of the homebuilding business community's revered leaders looks back and looks ahead, here's a first MasterClass in building company cultures you can apply today.

In His Own Words: Larry Webb's 5 Teachable Moments As Leader

As one of the homebuilding business community's revered leaders looks back and looks ahead, here's a first MasterClass in building company cultures you can apply today. 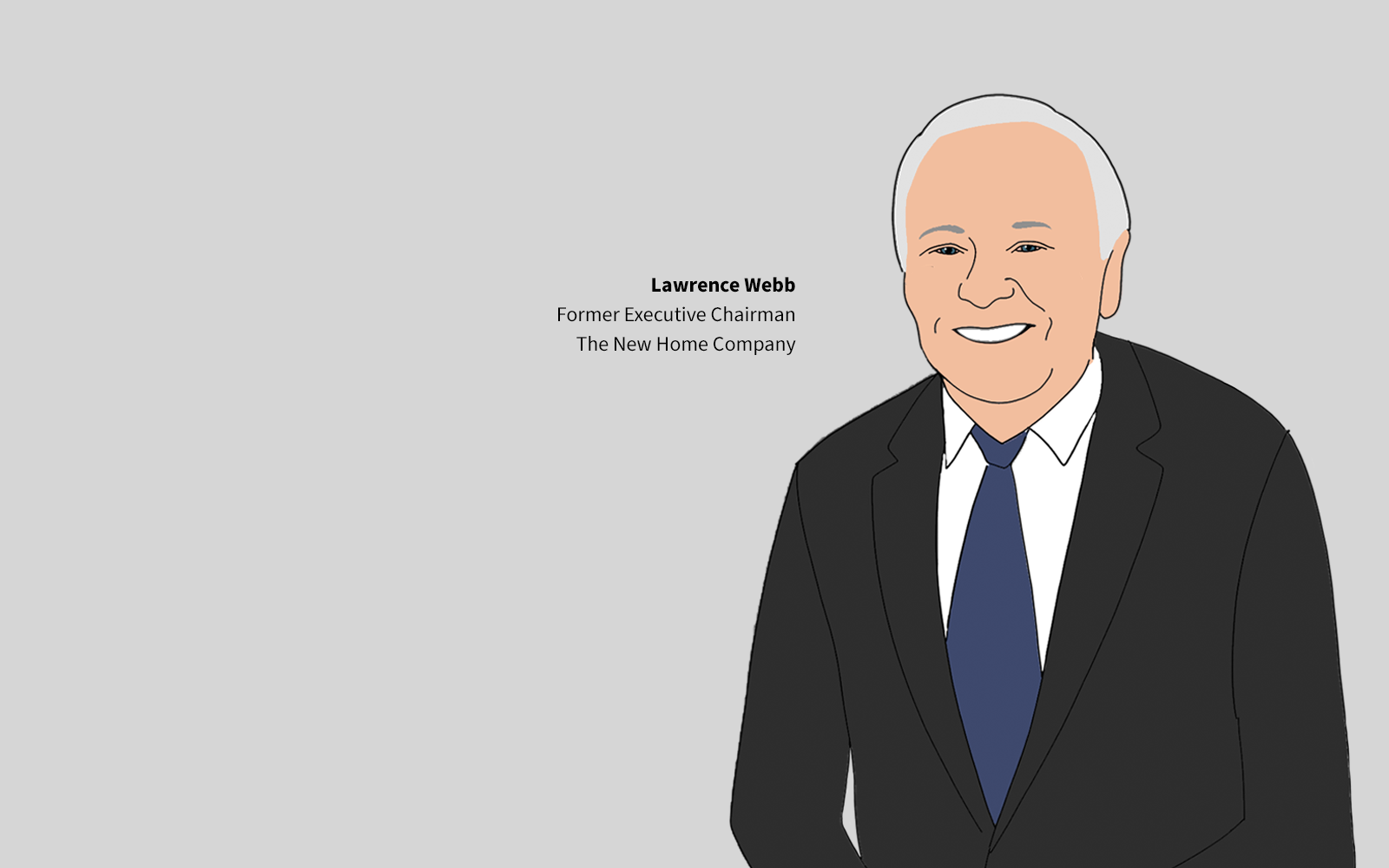 The year Apple Computer incorporated, and Jimmy Carter swore in as the 39th President, and Elvis Presley "left the building" after performing Market Square Arena in Indianapolis, Anwar Sadat made an official visit to Israel to meet with Menachem Begin, Virginia Wade won Wimbledon, and the Department of Energy came into being ...

He gave up teaching  – high school history – to learn. He'd learn, certainly, to use his voice, but less obviously, when to listen. He'd learn when to strike a bold course, but less abundantly evident, when it would take the brilliance, resolve, and teamwork of others to achieve the bold goal. He'd learn the power of humility and mistakes as tools to grow and teach and inspire. He'd learn that knowledge and experience were only half of an equation that adds up to wisdom, and that the other half was willingness to admit not knowing, to be ferociously curious, and to try fresh approaches to seek new solutions.

He gave up being an educator in 1977 for a life- and career-long education to become who Larry Webb is, a business leader who remained a student of serving people whom he worked with and worked for, a student of leadership. Others' best selves – in their jobs, their realms of influence, their homes, and their communities – have been at the heart of Webb's 45-year professional pathway.

Step one was a master's in urban planning at Harvard, where the likes of Jane Jacobs impressed upon him matters like “There is no logic that can be superimposed on the city; people make it, and it is to them, not buildings, that we must fit our plans.”

The rest is history – at least through a lens that focuses on homebuilding and development organizations that incubate leaders and stand up thriving communities from raw ground, and ignite the kind of capability that only a culture can sustain.

Larry's journey from Harvard to market analyst and researcher to residential development advisor to Kaufman & Broad, to Pacific Greystone, to John Laing Homes (1995-2008), to restructuring officer (2008-09), to a depths-of-the-financial-crisis start-up called The New Home Company (2009-21) is a well-documented story.

In the countless recognitions and honors and accolades – individual, organizational, industry-wide – that mark well-deserved mile markers of icon-making achievement, what may get glossed over or lost is this. Larry Webb never stopped practicing at being a student, at understanding how his own knowledge deficits and mistakes could lift not only himself but others.

And another essential thing to know about Larry Webb, the lifelong student of business leadership is this. If you ever get a choice of someone to hang out with at a bar, and laugh to the wee hours with a guy who grew up working late shifts at steel works in Buffalo, NY, pick Larry. There and then you'll get how young someone learns to check his ego, not take himself all that seriously, and how laughter and companionship and trust weave a triple-helix through the lifecycle of work.

Fortunately for The Builder's Daily, what has consumed Larry Webb from some point in 1977 still consumes him each day to this day, the practice of being a student of leadership.

In our increasingly “squiggly” careers, where people change roles more frequently and fluidly and develop in different directions, the ability to unlearn, learn, and relearn is vital for long-term success. It helps us increase our readiness for the opportunities that change presents and our resilience to the inevitable challenges we’ll experience along the way. Adaptive and proactive learners are highly prized assets for organizations, and investing in learning creates long-term dividends for our career development.

Let's listen to Larry in his own words, shall we? We talked about "learning-moment milestones" he's valued in his 45-plus year career. Safe to say, these are not the last words, but merely the start of another new chapter for a man who's made it his life's work to learn leadership on the job.

"Milestone one is really three milestones, and it has to do with team making. It took three different roles, in 1987 with Kaufman & Broad, in 1991, with Pacific Greystone, and in 1995, with John Laing Homes, and in each case I went into an organization and took a leadership position and had to learn about people in a way that was different than grad school had taught me. Each of those companies brought me in because somebody else had failed.  In all three companies, the leadership and the people in each of these companies were pretty darned good. But in all three cases, I found it incredible that 1. the people shared a lack of trust with both the organization and each other and 2. they were all working extremely hard, but with doors shut and in silence

I knew I had to develop relationships and earn their trust me and get them to trust each other. Here's what I learned, and it took me all three instances to finally realize it. I would discover that each time, there was one senior manager in each place incapable of doing trusting me and earning the others' trust. I had to replace them. The first time, at K&B, I assumed I could change anybody, and it took me longer to come around that I couldn't. At Greystone, it took a year-and-a-half, so a little faster, and at John Laing, it was sooner than that. That one person made all the difference in the world. Thing is, in every case I was really impressed with how hard they worked and how much they cared. But, hard work is only part of the stolution. In homebuilding, as a business you need to work as a team. There are no vps of finance, marketing, design, construction, land who won't tell you why their department is the most important. Until you get them each to stand in one another's shoes, you are going to hit a ceiling. The team is the thing.

Culture Comes Only From Doing the Right Thing

Milestone two: from 1998 to 2006, a ceo at John Laing, we grew at a very fast rate, going from three small deivisons closing 500 houses, to eight divisions closing almost 3,000 homes,  generating almost $2billion in annual revenue. It was exciting and thrilling. Looking back, I made a lot of mistakes and learned a lot  about people, the organization, what to do and what not to do. We were having a lot of financial success, and it became clear in those days we had division presidents and leaders who felt we were succeeding because we were the smartest. Ego became an enemy.  I was part of it. I'd let someone get away with some bad act or other under the guise of making the numbers, making the plan.

But, making the plan the wrong way is not making the plan, and I had to learn that. You can lose everything you’ve worked for culturally and undermine all the good work people are doing underneath that bad actor. And the entire culture and structure of what you’re trying to do can evaporate if you allow it. As a leader, you must get rid of ego and not let people compromise on the important things.  I had to learn the line between empowerment -- which is a good thing – and letting leaders freelance on the basis they're being successful whatever it too. I was slow to learn that.

Knowing when to sell

Milestone three: It's good for anybody in our industry to recognize when it’s time to not grow. To sell your business. The underpinnings that made John Laing succeed in its early growth spurt were different than the underpinnings in 2005. In June 2006, we closed with Emaar on Laing, and at the time, it was the largest private transaction that had ever just closed. For The New Home Company, it was a similar situation as far as a sense of timing. I believe for me and senior leaders and for the value of the company it was the right thing to do, even though it was a very difficult decision, and almost nobody ever does it sell when things are very good.

Culture is hard to get, easy to lose

Milestone four: I have bought, sold, and merged companies. I saw in first instance, after the sale of John Laing to Emaar that culture is a fragile and fragile thing. I worked 13 years at Laing to create a company with my whole heart to put customers  and team members at the center of focus, and I felt by the time I got to my car, how fragile a culture can be. I  don’t think leaders appreciate and think about this enough.

Milestone 5: In sept 2009, my partners Joe Davis, Tom Redwitz, Wayne Stelmar and I went all-in to create a new company. I learned a lot doing a startup that I would have learned from any other position. The three real lessons for me: 1. you need to have a clear alignment and philosophy of what you want the company to be and communicate that with your co-founders 2.  you want to bring in people (and the first group of critical hires amounted to about 30 people) and you want them to need ensure that each of them is totally aligned on that set of principles and values and 3. the biggest lesson for me personally, was to bring on partners for investment and lending and joint ventures that are aligned as well. If you don't, minute there are roadblocks or speedbumps there's trouble.

With that well-shared clear vision, the right base of team members, and the right partners in alignment, you can overcome any speed bump. I if you don’t, any speed bump and wreck it.

As part of the start-up milestone, there was the huge lesson for me going public in 2014. I had spend the most of my time earlier as a private builder. I think looking back that I probably misunderstood some of the challenges of going from a private company to a public company. Challenges it places on the staff. If I could do it again I'd have spent a lot more time communicating with all of my staff on what it meant and how it would impact them. Instead, I said "Trust Me it’ll be okay." That probable prevented us from jumping in to being a public company with both feet and doing better at it. Instead, I preferred to think of it as  running company like we had public money, but had the soul of a private. I wished I’d been able to learn that sooner and more effectively.

There! And that's not the last word from Larry, as he's made it known to The Builder's Daily that he'd like to help where he can to share what he's learned and sees as opportunity with other leaders in the community. So, reach out.