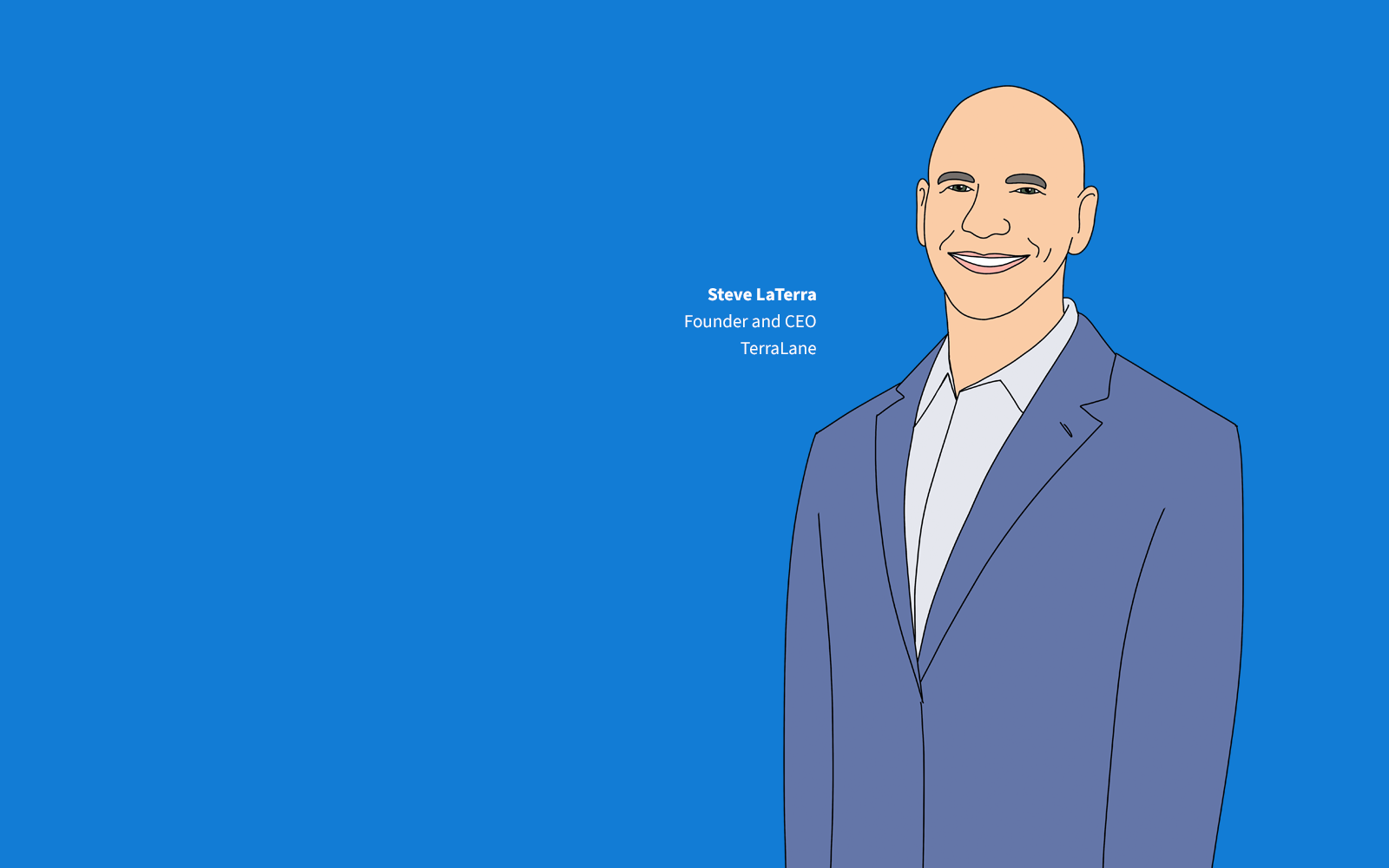 Each and every company whose financial and operational livelihood is in the homes-, communities-, and flourishing society-making business these days will likely prosper, subsist or perish on a staircase whose eight steps start out wide at the bottom and taper to a tiny toehold at the top.

This is the "significant hurdles" factor we believe has kicked-in in residential real estate's current near- and mid-term outlook. It sets some firms and their investor stakeholders apart from the rest. At times like now, which could amount to a big winnowing, the progression up those steps or not may prove to be a meaningful business resilience lesson on the differences between the crude tools of economics and the refined solutions of business success.

Per a press statement, the deal included:

Strategically, for TerraLane, the deal attests to the 2019 start-up's strong, proven value-creation capability out of the gate, benefiting from precise market insight, operations and execution chops, and timing to replenish its cash coffers for expansion, both of its product and customer segmentation portfolio and its geographical market exposure. For the buyer, Inland, the deal catapults its built-to-rent presence in one of housing's hottest markets, part of an aggressive portfolio improvement program across 49 states and an array of property types.

At a higher level, the TerraLane-Inland deal illustrates what – and who – less holistically modeled competitors are up against as market conditions begin to alter the dynamic in an economic softening wide open to speculation as to duration, severity, and trajectory. Beneath the pulse-quickening transaction value, you might miss three "devils in the details," obscured by the headline build-for-rent headline and the $455 thousand cost-per-door paid for the two higher-end neighborhoods.

We'll revisit this. First, however, context as to why this competitive advantage – experienced, practiced, time- and place-tested construction and real estate operators versus well-heeled speculators in a rush to put investment into place in one of residential real state's "sure-bet" asset classes.

If your plan, your idea or your art doesn’t involve any significant hurdles in moving forward, it’s probably not worth that much.

If it were easy, everyone would do it.

The tactic is to seek a path where you see and understand the significant hurdles that kept others away. And then dance with them.

They’re not a problem, they’re a feature.

This story draws on the "significant hurdles" theme we find to be one of residential real estate's dramatic and financially consequential narratives of the moment.

Importantly, difficulty for others – perhaps the majority of others – is one of the eight steps up the continuum, starting with raw need and rising to a where a business can sustain a customer-focused capability to weather turbulence. This is why we'd contend that now, for an indefinite time ahead, natural selection will likely do some sculpting, shaping, and resizing of the market over the next couple of years, even as the Millennial and Baby Boom juggernaut phenomena work through the economic and housing landscape.

Here are the eight housing activators we'd say current vested and invested stakeholders in market-rate residential development have largely counted on as assumptions to propel them to business success:

Demography, of course, propels the first step up towards the "significant hurdles," from the baseline, "everybody needs shelter." Thing is, experience and wisdom that date back to when the Baby Boom generation came of age illustrate the sharp, existential contrast between demographic destiny and business success. Failure rates for new products and services aimed at Baby Boom consumers were consistently in the 80s to 90s percents.

Household and behavioral economics, family formation, kitchen table finance, educational attainment, etc. constitutes a narrower step up from demography, and so on. It matters less how many tens of millions of people need or want something than how many 10s or hundreds or thousands of them choose to spend their money on what you produce.

This continuum is relevant. Business conditions – however severe or benign the ultimate verdict is for market-rate builders, developers, and their partners in the next patch – are evolving rapidly now in such a way that has begun to discriminate on which firms face trickier, stiffer, more adverse stresses and shocks, versus ones that seem more fit for what's going on now and what's ahead.

It's a long stretch to classic economics, but among the eight steps we'd suggest are where most stakeholders lay their biggest investment bets, the bottom three are where many investors are drawn in, but the top two rank as the strongest indicators and predictors of business resilience. De-risked balance sheets, pared down owned land portfolios, and strong current cash flow and margins would certainly have worked to better prepare many organizations for the housing crisis and meltdown of 2005-through-2009. Will those measures adequately buffer firms from harm in the coming months?

We think the answer will have to do with how far up that eight-step staircase a firm has gone, and we believe many firms have not evolved much past the first three – need, shortage, and scarcity. The blend of multi-cycle experience, data-enriched knowledge, wisdom, and comfort with constant learning.

Circling back to our case in point, TerraLane ceo Steven La Terra looks at challenges from the standpoint of someone who's standing on that sixth and eighth step, where your calculus is not on a generic "everybody needs housing and the cost of ownership is pricing many people out of the market, which gives single-family-rental developers an edge."

That's essentially table stakes, and not a strategic competitive edge. What is a competitive edge – in the single-family-built-to-rent arena as in any other housing segment, as it typically ranks as a household's largest monthly budget outlay – are the "devils within the details" of the sizzling category.

That's not an investor-developer plunging into a hot asset class. That's an experienced community development expert ascending those eight steps – the bottom being need and the top being choice – to find a triggering match between product, price, and location and the customer.

Rather than look at the non-specific opportunity in both the Phoenix area and, increasingly, greater Arizona, Texas, and Southern California, La Terra now has a cash trove to build out – across bigger land parcels and in different metro and submarket arenas – an expanded "mixed-segment" product array within a neighborhood to increase exposure to varying household income levels.

We'll have an opportunity after this deal to look at larger site acquisitions, and explore adding – where there's a good match – to the rental product type, like three bedroom units, townhomes, and other plans," La Terra tells us. "The Phoenix area has had some frothy deals, some deals that dropped or not supported, but we're seeing a lot of runway for deals, neighborhoods, and products on the for-rent side. The 'normalization' we're seeing is a positive for where our position and plans take us."

Almost as important, opportunity to sustain a place on the top two of the eight steps of housing resiliency, includes – in addition to patient capital, local market knowledge, customer-focused product, and a high level of operational excellence – exceptional efficacy at navigating local push-back and official resistance to new communities in any area.

Arizona needs as many as 270,000 additional homes with rents and prices below what apartments and houses are going for now to keep the state’s growing affordable housing problem from becoming a crisis.

At least 30 apartment developments stalled or were shelved across metro Phoenix in 2021 due to not-in-my-backyard-ism, zoning issues and political backlash.

So, you can see, the steps from need, to shortage, to scarcity, etc., to choice must each be part of a real estate and construction team's skill-set. As we've heard from a number of players operating right up the stairway, they're looking forward to the impact of those "significant hurdles" as a clarifier of where value creation and resilience stand apart in a high-stakes market that has become crowded, noisy, and rushed.

Land Deals Pivot From Fast-Forward To Pause, But For How Long?

Wait-and-see kicks into effect, with a few noteworthy walk-aways and some agreements falling through at the 11th hour. The question is how long land in limbo can last.


Behind The Headlines: The Sekisui House-Chesmar $514 Mil Combo

The year's largest M&A deal yet, and the largest publicly-disclosed private company valuation since 2012 makes for a story about new beginnings rather than the end of a cycle.

Land Deals Pivot From Fast-Forward To Pause, But For How Long?

Wait-and-see kicks into effect, with a few noteworthy walk-aways and some agreements falling through at the 11th hour. The question is how long land in limbo can last.


Behind The Headlines: The Sekisui House-Chesmar $514 Mil Combo

The year's largest M&A deal yet, and the largest publicly-disclosed private company valuation since 2012 makes for a story about new beginnings rather than the end of a cycle.