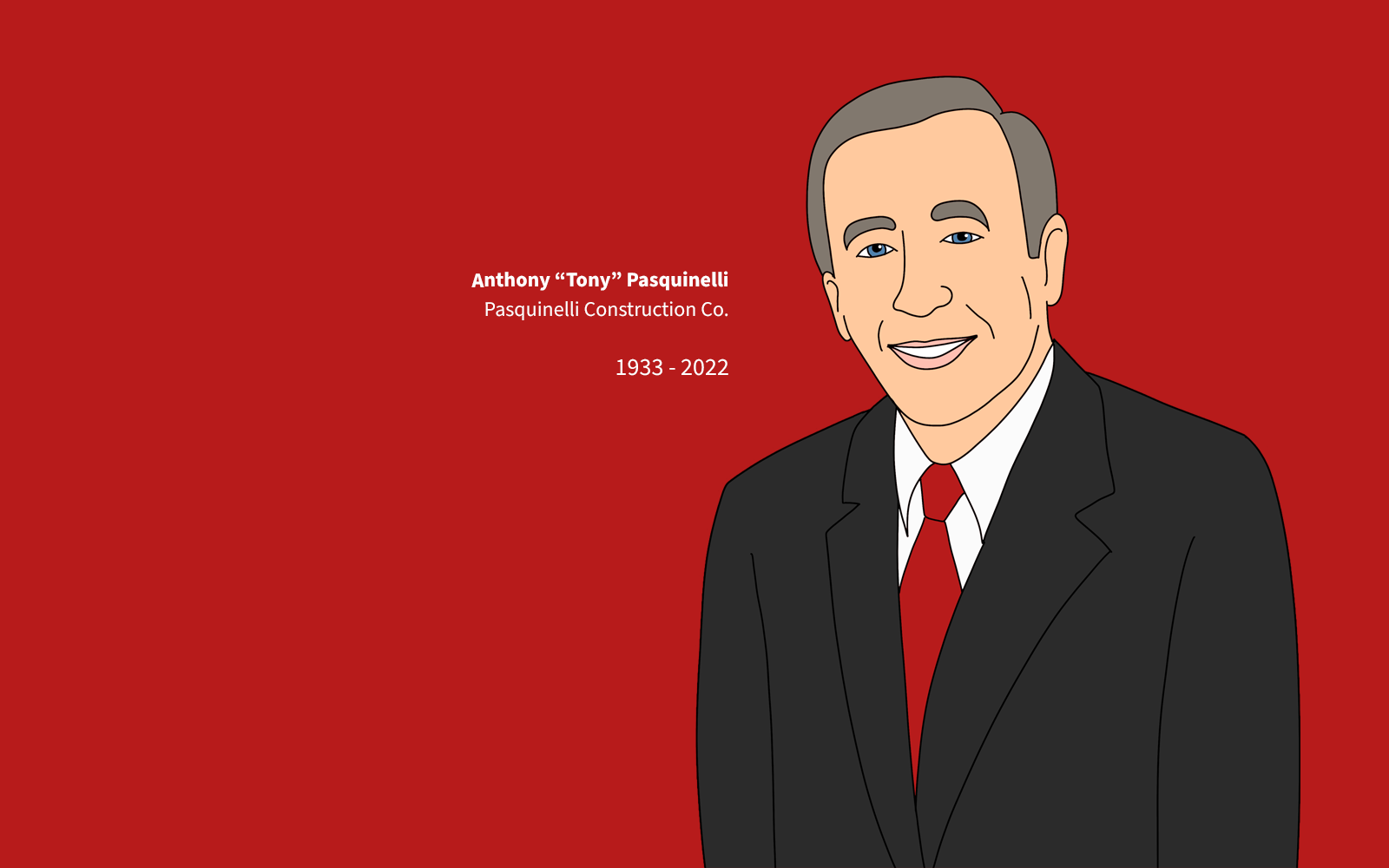 If you grew up first-generation Italian in Southside Chicago's Evergreen Park area in the 1930s, one thing you could be sure of is that you were not born a legend. If the word legend ever went hand in hand with your name, you had to make it so.

Anthony "Tony" Pasquinelli died this past Easter Sunday, April 17. He was 88, surrounded by family in Hinsdale, just west of Chicago.

Homebuilding industry legend goes hand in hand with Tony Pasquinelli's name. That's because he made himself one. That may owe in large part to one of Tony's signature traits, and what made he and his brother Bruno stand out distinctively among builders in any room full of them:  They recognized a meaningful difference between what they knew instinctively, in their guts, and what they knew they'd need to learn, and keep learning, and never stop.

My Uncle Tony and my father were two Italian boys from Chicago," says Tony's nephew Bruno, whose June 2020 start-up Cadence Homes serves the dynamic Dallas-Fort Worth market. "They were never the sophisticated types. For them, it was always learning to do the simple things really well."

His passing is a loss to homebuilding, for Tony was a treasure in both character and accomplishment, with his big brother Bruno and little brother Michael in Pasquinelli Construction Co. They built an empire from humble beginnings in Chicagoland: "45,000 homes across 13 metro markets in 13 states, rising to their pinnacle in the early 2000s, when they became the 24th largest home-building company in the United States, and the fifth largest private home-building company in the country."

Tony and his brother's specialty as builders is what urban planners and housing advocates now acclaim as "missing middle" higher-density townhome development, which nephew Bruno Pasquinelli estimates accounted for more than eight of every 10 homes they built, opening the door to homeownership for so many who otherwise had no viable way into the American Dream.

Tony's devotion to career- and lifelong learning no matter what level of success his work amounted to lives on.  It's a renewable and perpetual example to thousands and thousands of homebuilders whose name is on the shingle they hang out to identify their company in today's dynamic and shifting housing market.

Tony and Bruno put their own name – and a plumb bob logo that denoted "straight and true in all you do" -- on the company not because of ego or vanity. They did it heeding their father's advice that people – customers, city officials, subcontractors, land-sellers, bankers, local distributors, manufacturer vendors, and their own associates and team members – would regard that as a sign they stood for something that they could trust in, backing up what they said with what they did.

You put your name on your business so you'll always be proud of it," Bruno B. advised his two sons as they launched the firm together in 1958.

Few will miss Tony more than his older brother Bruno, his younger brothers Jim, Michael, and his children, Joseph, Maria, David, Anthony, Ellen, Ann-Marie, and Joan – and his nephew Bruno, who considers his uncle as a.

As the third child and second son of Bruno B. and Mabel Pasquinelli's five children, Tony grew up valuing education and its power to transform lives as one of American life's miraculous gifts, and one not to be squandered. His dad worked 45 years as chief design engineer for Chicago's iconic Miehle Printing Press that his children would go on and do better than he and his wife Mabel. A point of pride for Tony – who graduated from Lindblom High School  in 1949, and earned a bachelor's degree in accounting from University of Illinois in 1954 – is that he and his late wife Mary Ann were able to provide college, and in some cases, graduate school educations for their seven children.

And learning – about homebuilding, business, leadership, management, customer cares, operations, finance, land acquisition and development, vendor relationships, economics, and the rest  – was the heart and soul of how Tony and his career-long partner, Bruno hand-built.

Tony and Bruno's particular brand of learning was legend in itself. It might be called "Italian Socratic." It worked as follows:

Tony and Bruno would start discussions of almost any matter in the business with vehement disagreement and they'd argue, debate, and clash until they'd reach vehement agreement. It should be noted, that during seminar and conference sessions, nephew Bruno points out, Tony and Bruno typically would sit together, and they'd be engaged in this vehement disagreement to vehement agreement process as speakers would be presenting at the podium. "They were not very good at whispering," says Bruno.

I'd sometimes ride in the backseat of a car with Tony and Bruno going at each other in the front seat, and just not stop laughing" recalls Martin Freedland, who worked as a business consultant for the Pasquinellis for years, and hosted them at the annual Presidential Seminar in Aspen or Vail, CO for decades.

Tony and Bruno began their practice of a lifelong commitment to learning at the feet of Freedland's mentor and friend Lee Evans, who himself hosted the Pasquinelli brothers in one of his first Executive Seminars for homebuilders at a Holiday Inn. The accounting, finance, and business operations gantlet Evans would put his homebuilder clients through – including the Pasquinellis – included one of his most remembered nuggets of wisdom.

You stay in this business long enough," said Lee Evans, "and sooner or later, you're going to go broke. So, you need to take some of your plus 10% pre-tax earnings each year, and put it somewhere separate from the business so you don't lose everything"

Tony and Bruno listened and learned from Lee Evans, and they each sequestered enough of what they'd earned financially through the years so that when the Great Recession and housing crash of 2006 to 2011 finally leveled their empire – along with Chicagoland private builder powerhouses Kimball Hill, Kirk Homes, and Neumann Homes – their families had protected themselves from financial ruin.

My dad ran the homebuilding side of the business and was more of the conservative, hard-core operations focused leader," says Bruno. "My uncle Tony was more of the visionary, the one who set sights on what was possible for us to accomplish. He was so good at the land side of the business and finance, and it was his skills at that real estate dimension that generated the money for us to capitalize the homebuilding's ability to diversify and expand. A lot of what I consider myself an expert in regarding land acquisition and development, I owe to him."

As well, nephew Bruno notes, Tony was ever focused on the little, simple things he regarded as essential to success, like always "dressing the part, in a sports jacket, collared shirt and tie."

Beyond that, Bruno, Tony felt vehemently, as he did everything else, that a one to one meeting with a colleague, potential partner, associate or contractor needed to start, invariably with a human connection, rather than with the business matter to be addressed.

He'd tell me, Bruno, rapport is critical with the people you sit down with," Bruno recalls. "You have to relate to people, and listen to them. It's how you learn."

Here are some other details of Tony Pasquinelli's life, which The Builder's Daily whole-heartedly salutes:

Drafted into the U.S. Army in 1956, Tony lived in Fort Lee, Va., for two years. Upon his return to Chicago, he earned the recognition of top lumber salesman at Lakeside Lumber. Tony and his brother, Bruno, co-founded a construction company in 1958. Unsure of what to name their business, they went to their father for advice, who told them, "put your name on your business so you'll always be proud of it." Taking their dad's advice to heart, they named their venture Pasquinelli Construction Co.

Over 50 years, the company built 45,000 homes across 13 metro markets in 13 states, rising to their pinnacle in the early 2000s, when they became the 24th largest home-building company in the United States and the fifth largest private home-building company in the country. Bruno and Tony were not only business partners, but dear friends who raised their children together, and spent many happy years vacationing in Aspen, Colo., at Christmas time, where they shared a love of skiing.

The 1980s and 1990s were very busy for Tony, as he held many leadership positions at organizations such as the Residential Construction Employers Council (president), Matteson-Richton Bank (board director), Beverly Bank Matteson (board chairman) and St. Paul Federal Bank (director). Perhaps his proudest personal achievement was his involvement in The Center for Performing Arts at Governor's State University, where he was a co-founder and board member for many years.

Tony's passion for real estate and education led him to establish the Distinguished Chair in Real Estate at the School of Real Estate at Roosevelt University, Chicago, where he served as chairman of the advisory board of the Marshall Bennett Institute of Real Estate.

Tony and Bruno established the Pasquinelli Family Foundation, a philanthropic endeavor designed to give back to the communities that were important to them, including the Caritas Society (Saint Coletta), Misericordia, Northwestern Hospital, Respond Now, Common Hope, Marian Catholic High School and many others.