How Epic Partners Beat Epic Breakdowns In The Supply Chain

The story of Holiday Builders and its partners solving supply paralysis to deliver a home for a deserving veteran and his family is a story of people in homebuilding doing what others say, 'can't be done.'

How Epic Partners Beat Epic Breakdowns In The Supply Chain

The story of Holiday Builders and its partners solving supply paralysis to deliver a home for a deserving veteran and his family is a story of people in homebuilding doing what others say, 'can't be done.' 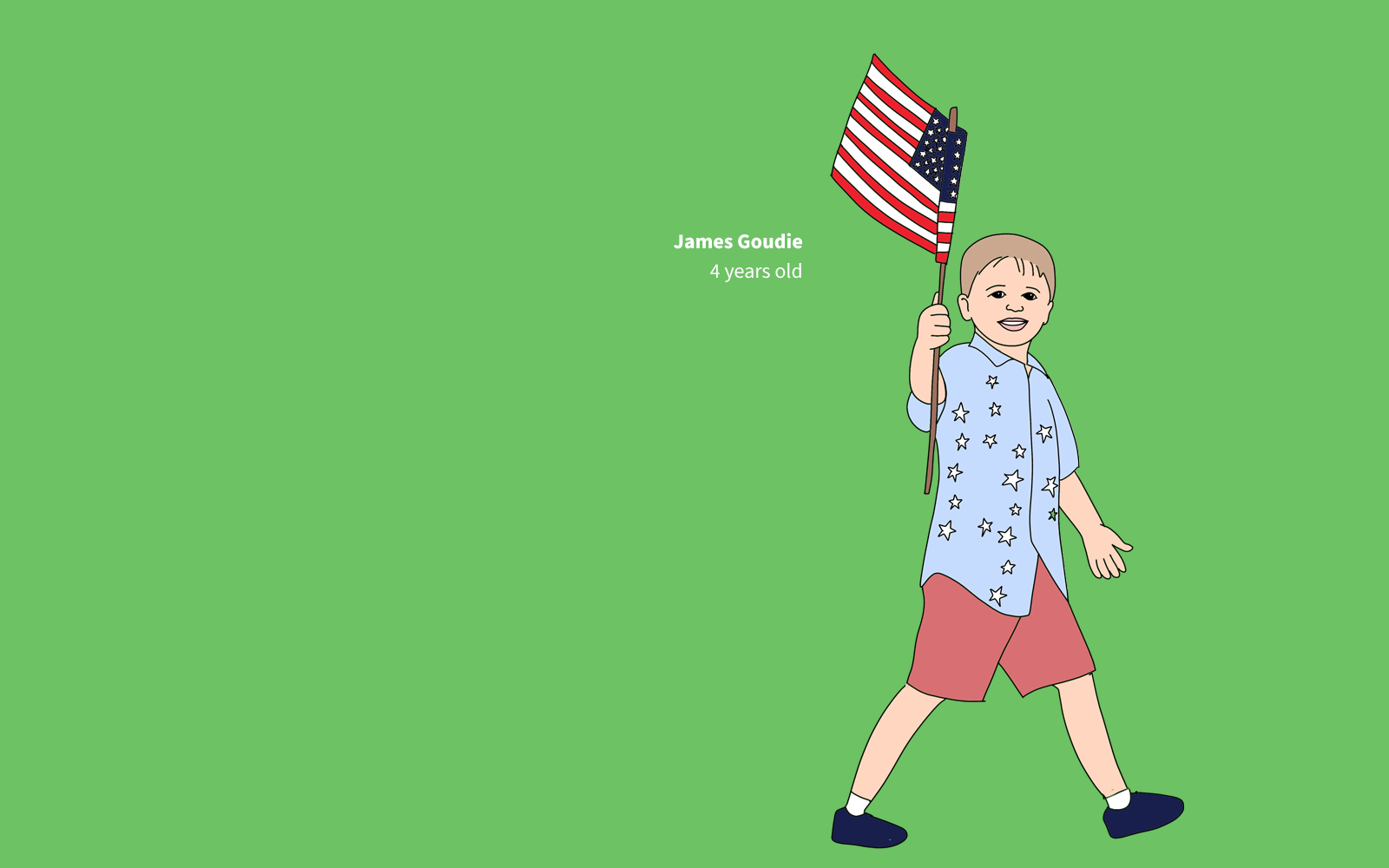 James Goudie, his brother Jack and his sister Brie, together are why.

A very shallow layer beneath any who, what, where, when, and how story The Builder's Daily will ever tell about homebuilders and their partners, lives a why.

Coming up on a day later this week that people might fleetingly drop their differences and honor and say thank you to all people – living, dead, and even four-years-old and younger – who serve in America's armed services to protect and defend who we are and what we believe, the why is particularly critical.

It's critical now. It's a moment the economy, and production, and consumption, and capability, and value move clumsily, confusingly, and unpredictably toward market-based self-reliance, and away from policy-fueled life-support. Like it or not, it's limbo. In this transition from neither-here-nor-there to what's next, the why in its rawest, purest, most potent form matters.

Four-year-old James loves animals and stories about them. His six-year-old brother Jack can't get enough of Legos. His teenage sister Brittany revels in a bit of sanctuary and time to hear herself think in a bustling household, a room of her own.

What each of these kids loves, prospers in, and needs, homebuilders and their partners do. That's the why at the core of this story about Army Sergeant First Class John Goudie and his wife Kristi, and their kids, and the Building Homes for Heroes initiative willingly embraced by Melbourne, FL-based Holiday Builders, and we'll circle directly back there in a moment.

The why of this story, among other things, is clear proof of one of the constants in homebuilding, and in the community, which is that when odds are stacked up against something getting done, homebuilders and their partners can get it done.

James, Jack, and Brie Goudie may never know the odds against their newly built home in Freeport, FL, getting started, built, and delivered to them in early October. That's okay. What's important is why they are at the root of the capability to – essentially – do what couldn't be done.

We'll get back to the Goudie family. They, as honorees just like scores of the nation's armed services heroes each year who are beneficiaries of Habitat for Humanity’s Veterans Build program, Operation Finally Home, Homes For Our Troops (HFOT), the Gary Sinise Foundation’s R.I.S.E. program, The Warrior’s Project, sponsored by Operation: Warrior’s Path, Operation Homefront's Homes on the Homefront, and PulteGroup's decade-long Built to Honor program, know that's what builders and their partners do.

They do what "can't be done," at least according to naysayers or those who do not get to witness the alchemy of people on the builders' side, the trades, the manufacturers, the distributors, and the local official side locking arms to defy such odds.

When you consider James, and Jack, and Brie, and their parents John and Kristi, not getting it done is not an option. That's the why we'll circle back to.

Florida gulf coast town Freeport – at a rough equidistance northwest to Pensacola and southeast to Panama City – got no free pass on the epic building materials and products supply chain breakdown of 2021.

A welter of new construction and development homebuilders ply their trade there. Holiday Builders is just one of them, trying valiantly to bring completions across the finish line at its Marquis Landing projects and anxious to bring online releases of its new subdivisions at Parkview at Hammock Bay to accommodate demand.

And like any team of mortals, their start-to-completion build cycles of the past 10 months or more have succumbed to a vortex. At first, it was delays that made sense. Then came surprises. And, finally now, a convulsion of local, regional, national, and global chokeholds that defy all imagination, resulting in what's effectively an every-man-for-himself free-for-all on access to key materials and products needed to finish every new home on every new-home jobsite.

We had to double-down on every part of this Building Homes for Heroes project," says Holiday Builders ceo Bruce Assam. "Not coming through for Army Sergeant First Class John Goudie and his family was not an option. So we had to ensure – in the middle of having a difficult time getting materials and products in for the rest of the homes in process – we could not only secure the end-to-end process and resources, but to do it in a way that this family needed."

Sergeant Goudie, a Purple Heart honoree, had sustained wounds serving in Special Forces operations in Afghanistan and lost his left leg, and endured other medical trauma. He and his wife Kristi needed a home fitted to accommodate his and his family's array of abilities and disabilities, which meant American Disabilities Act-compliant modifications to floorplans, kitchen and bathroom design and engineering, all the kinds of variations that would normally have been showstoppers in the current supply-constrained moment.

The timeline of the venture left no wiggle room. What's more schedules, completion dates, and dedication dates were all set last Fall in a number of site selection, floor plan drafts, and modifications that evolved through GoToMeeting group meetings by year-end 2020. That, remember, was before the s- - - hit the fan starting with lumber shortages after the turn of the year.

Had we been challenged with these issues in normal times might have felt stressful enough," says Assam. "I'm just so proud of the way our Holiday Builders team and our trade partners, and every single person at every single hand-off point put their all into navigating through the stress points to this most gratifying moment of seeing this family see their completed home for the first time."

As many as 35 building materials, manufacturers, installers, and trade crews donated time and in-kind materials, putting their shoulders into an effort where "schedule elongation" was simply not allowed to happen.

"Donated materials, products, and crew time added up to as much as $200,000 in in-kind value that we couldn't have done without," says Richard A. Brown, president of operations at Holiday Builders. "The Gulf Region for Holiday did a great job up there, and our partners – whether it was supplying windows, garage doors, making pocket-doors rather than swinging interior doors – as busy and crazy as everybody was, they all put this job ahead of others on their priority list. We even had a couple of neighbors come over a few days before the dedication ceremony, and they put together the swing set we'd gotten for the backyard. It was magnificent."

The magic of the moment came as James, his brother Jack, their sister Brie, and their parents experienced live and in real-time what this year-long effort meant for them. Army Sergeant First Class John Goudie and his wife Kristi had spent time with the builder team to map through how the house needed to live and work.

Beyond that, Kristi talked at length to consultants at Builders Design about each of her family members, and what would touch each of them meaningfully in the interior design and finishes in the home.

It had to be one of the most moving moments in my career when Kristi came up to me at the gifting ceremony," says Joe Duffus, ceo of Builders Design, and a TBD Dream Team contributor. "She said to me, your team listened to everything I said, down to the minute detail, and you did all of that, and then you went beyond."

That brings us full circle, to the why.

Casualties of war and armed combat continue. Women and men keep signing up for duty to protect American life as we know it. They train and prepare themselves – if necessary – for the ultimate sacrifice in serving us. As of this report, about 1.4 million people serve in the U.S. armed forces, and there are about 18.2 million living veterans who've done so, some 52,000 of whom have sustained injury in combat, and more of whom have experienced Post Traumatic Stress Disorder. In my lifetime alone, more than 100,000 U.S. armed services members have died working to safeguard my liberties, my way of life, my ability to prosper. Moreover, one of every four men and women who've served during those past 65 years now lives with a disability.

Sadly, we – as citizens, as a people – take them for granted. We value their service and sacrifice all too little. Home building and home builders recognize this and want to change it.

We pause in life, in business as usual, in normal activities, to honor those men and women and those men and women's families and loved ones, who've sacrificed so that we can know life, business as usual, and normal activities as we do. It's fitting. To live a moment of reverence, esteem, and thankfulness – truly, to honor – is both to feel and to act fittingly as people who care--for their own loved ones and for others'.

Army Sergeant First Class John Goudie says it himself. He did it, and does it, and will do it for his family.