With Boydston stepping down after 13 years as top-15 homebuilding firm Ashton Woods' cfo, and Zack Sawyer succeeding her, both Ashton Woods and Boydston open new chapters, each with great expectations.

With Boydston stepping down after 13 years as top-15 homebuilding firm Ashton Woods' cfo, and Zack Sawyer succeeding her, both Ashton Woods and Boydston open new chapters, each with great expectations. 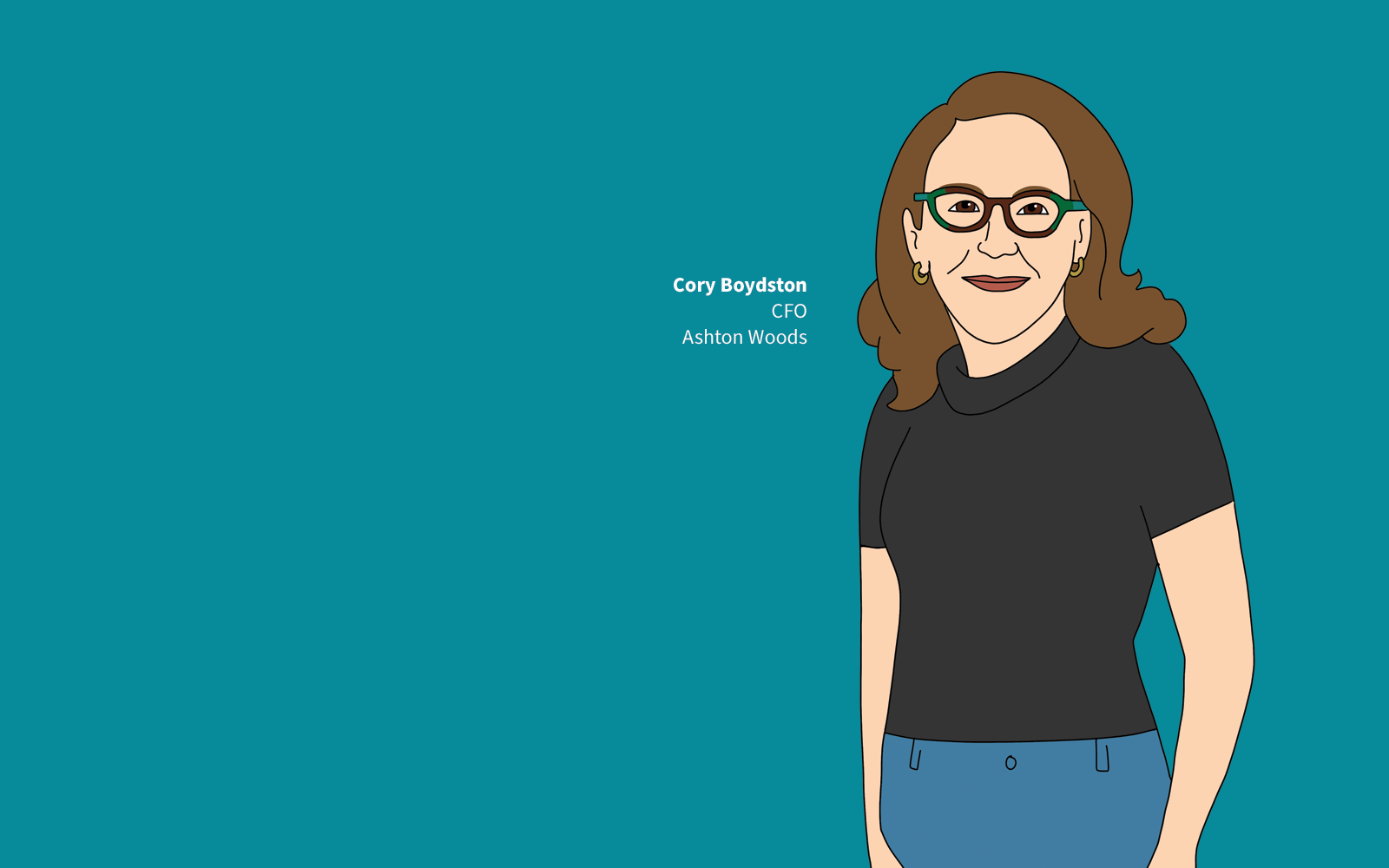 It's never not the right moment for the homebuilding community to celebrate the eternal flame that runs across the epic boom-and-bust cycles, its people.

At any point on those dizzying parabolic ups and downs it's always the right time to stop for a moment and take in what is remarkable, timeless, and ultimately, unbreakable, housing's human core.

So, it's no surprise that now – even as a progressively more unsteady state of vertigo seizes submarket after submarket in a daisy chain of fresh, previously unrecognized challenges – homebuilders and their vested and invested partners take a moment to celebrate a milestone moment of one of their own with full-throated pride and well-deserved honor.

This week, top 15-ranked homebuilder Ashton Woods announced such a milestone, a moment to breathe, reflect, celebrate, and salute.

A LinkedIn outpouring of heartfelt joy and support included these remarks:

Congratulations and very well-deserved Cory! Enjoy this next phase! Looking forward to continuing to have the benefit of your wisdom and experience on our board! All the best, Dave – David Flitman, president/CEO Builders FirstSource

Congratulations!! You have been an inspiration to so many of us. All the best! – Liesel Cooper, National president, Century Communities

Congratulations on your impending retirement. Few have had such a huge impact on so many. I feel incredibly lucky to have you in my life and benefit from your experience, wisdom and kindness. – former colleague Kathi James

Cory, who succeeded Ashton Woods' cfo Robert Salomon 13 years ago – which, we'll recall, was a no-sure-bet-for-survival moment of truth for privately-held, deeply indebted companies that had to face up to their lenders and investors and ask for new terms – had already established herself as one homebuilding's most capable strategic finance executives after senior-level positions with Lennar, Beazer Homes, and Starwood Land Advisors.

During Mrs. Boydston’s thirteen-year tenure, the Company grew from approximately $300 million to over $3 billion in annual revenues; completed numerous financings; and executed on strategic and operational initiatives designed to create long-term value to the Company’s owners."

Her 13 years as part of Ken Balogh's strategic brain trust at Ashton Woods underscore both her skill-sets in strategic finance and her passionate pursuit of strategic and business culture improvement, both within her team and organization, and more broadly, across homebuilding and its meta place in American business. With Ken and other strategic team members in 2009, Cory served as financial-strategic glue that held the Atlanta-based company together, almost miraculously. We wrote, looking back, in March 2011, giving just a glimmer of the super-powers Boydston drew on as one of this or any industry's best financial officers in any business:

During a death-defying stretch in 2009, Ashton Woods swapped its nearer-term debt for more ramp-way to pay it back, at a higher cost, of course; in 2010, it secured $75 million in expansion capital from investors who don't want their names publicized, and got a $10 million adrenaline boost of new equity from its Toronto-based Great Gulf Group majority owner. Too, it went from an eight-bank revolver at risk to a two-bank renewed $35 million revolver its management doesn't intend to touch.

And just like that, with $80 million in fresh funding, Ashton Woods went from life support to a place brim with financial feistiness. Other private building companies continued to succumb to the gravity of their land debts turning upside down, and lay powerless to move either to avert added peril or leap toward a flash of redemption. Ashton's management scrubbed its balance sheet, gulped its medicine, and got around to the business of preserving what may have been one of its more precious assets—its ability to pro forma forward sales based on its current pace.

Rare instances like this instance in August 2022 – when many of the residential development, investment, manufacturing, and construction business stands up to cheer – only occur because their origins were abundantly clear years and years earlier. That's the case with Cory Boydston. It's in no shred of a way ironic that many of the people welling up with joy, and pride, and support in recognizing Cory's achievements are the same ones she sat across the table from in prior, darker times, and put them through the rigors of financial work-outs, proverbial pounds of flesh, and unbecoming haircuts.

I've said it and lived it and believed it all my career," Cory Boydston tells us this morning. "You only ever have two things in this line of work, your reputation and your relationships. That's all you have. When times get difficult – like now – those are the things you lean on. I have to say that some of the most difficult moments for me professionally, personally, whatever, I was able to get through because I had those things. If you're honest with people, and you don't look at interactions with them as strictly about winning or losing but rather about respecting each other, then those relationships stand up. Some of my best friends in the business are ones I had to go through work-outs with."

Part of the explosive growth arc Ashton Woods achieved, crossing the $1 billion in revenues threshold in 2015, and then tripling since then, owes to a masterful land-and-finance asset-light strategy that meant lots and lots of smallish new community deals, each with a 24-month active-selling cycle. That level of nimbleness and execution – a secret sauce to how Ashton Woods formed its culture around customer responsiveness and centricity – has defined itself as a proficiency Boydston helped to set in motion, and now has prepared the team to carry on. Of her successor, Zach Sawyer, Boydston says:

He's super, and he's ready. The entire team at Ashton Woods is prepared. Ken [Balogh] is the best leader, and there's a lot of deep experience across the team. We had a dry-run for some of what's going on now when the Covid cris hit two years ago. They're equipped to do what they have to do."

And, and for Cory, what's next?

I'm only giving up my day job," she says. "Now I have more time for more of my other professional passions, as a Georgia advisory board member of The Trust for Public Land, a member of the board of directors and audit director of Builders FirstSource, and the work we're doing at Women's Housing Leadership Group."

The group, which she co-founded with Hearthstone senior VP Cindy Gilmore, and Arroyo Capital principal Leigh Austin, hung up its shingle in February 2018, with 15 members. At latest count, WHLG now serves 325 members nationwide, having grown during the Zoom-era pandemic period from its initial impetus as a way for the few and far-between women executives in homebuilding, development, and capital investment to connect, to socialize, to recognize themselves from their remote industry "islands," and to begin forming a plan.

I never had a woman in the industry above me that I could look up to and learn from and aspire to and count on for mentorship," says Boydston. "Now we've created a network, across all these outposts, of people who can serve as that kind of resource, pivot to learning and communications, and coaching, etc. One of the things I've truly loved about my job all along is the opportunity to help people in their jobs, to grow in their careers, find opportunities, grow into their roles in the business and their livelihoods. I want us to be that."

So, one of the reasons so many people are celebrating Cory Boydston's retirement milestone is that one of the smartest, most capable, most inspiring, and – not to mention funny – people in homebuilding now has more time to do what she wants to do and be.