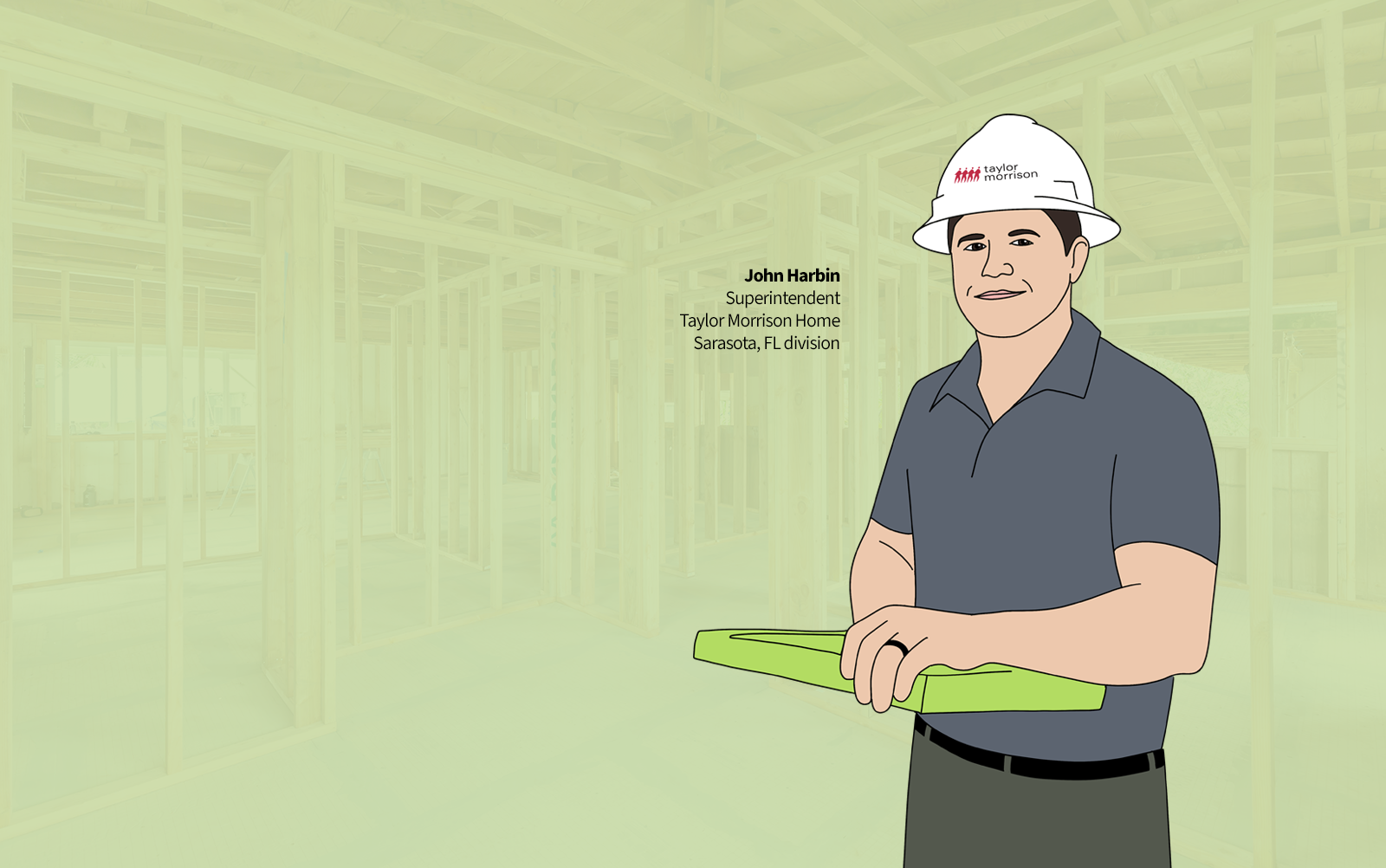 It hit home – literally -- early one February 2022 morning for 35-year-old John Harbin, a thermos cup of coffee in one hand and a tablet in the other.

The former U.S. Army vet – on the eve of graduating as one of the first six enrollees in Taylor Morrison's Voyager program, a construction superintendents' 8-week recruitment and training initiative that piloted in the sizzling Sarasota, FL, market in late 2021 – got his personal epiphany. The flash came as Harbin and Steve Evans -- leader of the homegrown management training initiative and senior national training partner at Taylor Morrison – stood together, looking out at an empty neighborhood-to-be tract of freshly graded land.

Mr. Evans said to me, 'John, what do you see when you look out there?' and I said to him, 'I see dirt.' And then he says, 'That's right, this is dirt; it's a field where what we do is to plant seeds, and those seeds become houses, and those houses are not just houses, they're homes where families live their lives and celebrate all the important times, and children grow up. This is what you become a part of.' That really hit home for me."

Up to that instant, Harbin had seized on Taylor Morrison's opportunity to go in and apply his prior military experience and team skills in a fresh new frontline role, with good pay, the kind of structure and collaboration he liked, and an otherwise vague 'I'll-give-it-a-try' attitude.

That morning, however, Harbin felt he'd found his real calling.

All the technical tasks, and skills, the people, and time, and process management aspects fit the bill as far as what I felt I'd be good at," Harbin says. "It was that morning that brought home why people care so much about doing this work. It struck me then that I'd found a livelihood."

Harbin moved his family from Georgia, where he'd been post-military service since 2017 in cybersecurity devices sales, to Nokomis, FL. He and his five other early-2022 trainee initiates now each oversee 12 to 15 home projects in Taylor Morrison's Sarasota and Tampa neighborhoods. A second cohort, fielded with the help of Austin-based Proteus Recruiting Group, specialists in linking vets of U.S. Armed Services to careers in the private sector, finished out a now-refined 6-week immersion program – 40% classroom and 60% at Taylor Morrison construction job sites  – this past early Summer.

Graduation class No. 3, this one due to graduate six more Voyager-minted supers this coming Friday out of Taylor Morrison's regional hub in Alpharetta, GA, will feed divisions in hyper-active Atlanta- and Charlotte, N.C.-area communities. Plans are to field at least one more cohort of Voyager program enrollees – possibly in Taylor Morrison's Texas operating arenas – in 2022, and then try to scale the program across the enterprise's 19 divisions in 11 states on an "as needed" unit volume basis, Evans says.

We now have 21 Voyager program graduates in the field, across our Sarasota, Tampa, Naples, and Orlando neighborhoods," says Evans, who came out of Taylor Morrison's human resources "people services" learning and education initiatives to run point on the firm's effort to take a new approach to bringing construction superintendents into its fold.  "What wasn't working that well was this repeated cycle of hiring supers who'd had some experience at other homebuilding firms," says Evans. "We were letting other builders do the initial training and onboarding, and that starts to become a diminishing return as we trade personnel back and forth. So, we've pivoted to try to bring in people ourselves, ones who are totally green to the construction space. This way, by making an immersive curriculum and mentors and coaches from construction, purchasing, land, finance, sales, etc. at the local level we can teach not just how to build a house, but how to do it as part of a cohesive process that's part of a customer-focused culture.

Supers play a crucial role across the build cycle," Evans adds. "Whether it's in highly-stressed trades relationships these days, or the reality that we're having increasingly to serve our home buying customers as counselors and psychologists, we've zeroed in on supers because they impact these capabilities, and we want to equip them to go into the field and succeed and be productive. If culturally – amidst these disruptions, shortages, deadlines, and stresses – we're not doing things differently than another homebuilder down the road, then why do it at all?"

Evans and the Taylor Morrison recruiting and training teams have worked in support of and as early beneficiaries of The Building Talent Foundation's now three-year-old initiative to establish and activate regenerative linkages between residential construction industry employers and the complex of career-influencing pivot points for young people, ranging from community colleges, to unemployment offices, to military veterans organizations, etc.

He says a challenge of the program is striking a balance between standardizing and scaling the training format and at the same time hew to highly localized technical, code, and even construction trade practices from market to market.

So far – from both the new team members themselves and from their managers and colleagues in those divisions – the feedback has been nothing but positive," says Evans. "You've got a win in attracting new people into the field, and then, by giving them the tools they need to succeed and a culturally supportive, coach-rich formative period, you're building loyalty."

Importantly, says Thomas Carpitella, ceo of homebuilding recruitment and search advisory firm Fast Tracking Solutions, the Taylor Morrison commitment and investment in the Voyager program reflects a willingness to break with prevailing habits of poaching talent from other firms by developing a homegrown talent bench that can sustain itself and build value over time. Superintendents, who typically earn between mid-$60s and mid-$80s, depending on the market, make for a ripe opportunity for the business community to self-improve, as they impact so many aspects of the end-to-end building lifecycle, Carpitella notes.

By reaching outside the industry and kindling belief among newcomers that homebuilding is a great place to come and work, companies like Taylor Morrison, Pulte, and NVR, for instance, are looking at this holistically and broadly in ways that will make them winners in the long run," says Carpitella. "Creating patient career pathways upward and forward, and exposing new team members early on to the emotional process of working directly for customers is a strategy that serves its own purpose, but it then also becomes a magnet to attract others to the field."

That human flywheel effect comes through loud and clear in Voyager program original John Harbin, who'd be the first to evangelize his newfound career home in homebuilding.

One of the biggest challenges of being in the military is assimilating back into real life in the civilian world, and what I've found in homebuilding taps directly into the people management, time management, process management, the focus on what you can do versus what you' can't do, and the spirit of brotherhood and teamwork we got good at in the service," says Harbin. "I would definitely recommend this opportunity to others – veterans, etc. It's not an easy job, but that's part of why it's a great fit for people who've gotten good at managing stress and solving problems and watching each others' backs."

Bellwether Lennar Sets A Pace That Challenges Others On Price

In ultra-concentrated markets where big nationals have deepened scale, where the public companies lead on price, private homebuilders hardly dare not to follow.

Almost all of the risk preparation builders and developers need to do to weather late '22 and 2023 should already have been done -- and in many cases, has. Still, it's not too late to cut losses and secure gains for the next stretch. Here's how.


For Bumpy Months Ahead, Doing More With Less Is Not An Option

From Q4 '22 through the end of '23, homebuilders that ramped up operations will now have to reset resources to an evolving, indefinite new reality ... a period that may require an focused 'what-not-to-do' list.

Bellwether Lennar Sets A Pace That Challenges Others On Price

In ultra-concentrated markets where big nationals have deepened scale, where the public companies lead on price, private homebuilders hardly dare not to follow.

Almost all of the risk preparation builders and developers need to do to weather late '22 and 2023 should already have been done -- and in many cases, has. Still, it's not too late to cut losses and secure gains for the next stretch. Here's how.


For Bumpy Months Ahead, Doing More With Less Is Not An Option

From Q4 '22 through the end of '23, homebuilders that ramped up operations will now have to reset resources to an evolving, indefinite new reality ... a period that may require an focused 'what-not-to-do' list.